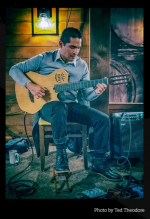 Join us for an entertaining evening of beautiful guitarwork by Carlos Odria!

The Peruvian-born guitarist has been described as a "breathtakingly talented musician… with an immense technical skill" (Worcester Telegram) and as a "guitar wizard" (Gamble Rogers Fest). His original compositions and arrangements of jazz standards and Latin American tunes deliver an exciting blend of international styles such as bossanova, Afro-Peruvian festejo, rumba flamenca, and Afro-Caribbean vibes with an improvisational approach inspired by the rich tradition of American jazz.

To listen to his music and learn more about his inspiring story, check out his website here: https://www.carlosodria.com/home

No registration required, but encouraged for event planning purposes.

CARLOS ODRIA holds a Ph.D. in Musicology from Florida State University, where he also obtained a Certificate in Music of the Americas. He studied classical and Latin American folk guitar with acclaimed Peruvian guitarist Pepe Torres. Later on, he pursued advanced jazz studies with Richie Zellon, jazz guitar arranging with Leo Welch, and Venezuelan cuatro at the Jose Luis Paz Conservatory in Maracaibo, Venezuela. In 2014, the debut album of Omnimusica, an ensemble in which Odria was the lead guitarist, was included on the official ballot for the 57th Grammy Awards, in the World Music category.

This program is sponsored by the Sondra Lane Cultural Funds from the Friends of the Lunenburg Public Library.

Registration for this event has now closed.