The Highwaymen: Songs and Stories with Matt York 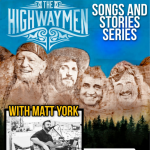 Longtime New England singer/songwriter Matt York will perform the songs of Johnny Cash, Willie Nelson, Kris Kristofferson and Waylon Jennings and tell stories of their careers. The four songwriting legends joined forces in the 1980's to form the country supergroup The Highwaymen. However, prior to that, they'd each established themselves as stars and their careers intersected many times since the 1960's.

No registration required, but encouraged for event planning purposes. Coffee and refreshments will be served prior to the concert.

Matt York grew up in Foxboro, Massachusetts and began playing the clubs of Boston as a teenager. Since then, he's played on stages throughout the United States and Canada. His album "Boston, Texas" was named Limelight Magazine's Debut Album of the Year". His last release, "Between the Bars" was listed as one of the top albums of 2017 by the Patriot Ledger, Gatehouse Media, Ryan's Smashing Life and several other radio stations and news publications. Visit his website here for more information: https://mattyorksongsandstories.com/home

Registration for this event has now closed.